Brief History of the Westie

How the Westie came to be selectively bred for his white coat is an interesting legend. The short-legged terriers of Scotland are now recognized as the Scottish, Skye, Cairn, Dandie Dinmont, and West Highland White Terriers. All undoubtedly descend from the same roots. All of these dogs were valued as intrepid hunters of small game. Originally, their coat colors ranged from black to red to cream or white.

Colonel Edward Donald Malcolm, of Poltalloch, Argyllshire, Scotland, is generally credited with breeding the white dogs true, although he took none of the credit unto himself. He had kept a pack of light colored working terriers for hunting. As the legend goes, a reddish dog of his, emerging from cover, was mistakenly shot for a fox. Malcolm is said to have decided on the spot to breed only for white dogs that could be readily identified in the field. 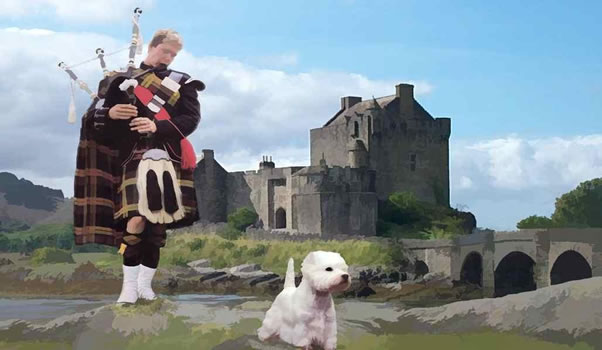 The breed was listed officially as the West Highland White Terrier in 1907 at the Crufts dog show in England. The name was chosen for the rugged character of the dogs and the area of their development.

The West Highland White Terrier Club of America was founded in 1909. It is a member club of the American Kennel Club. The Club's annual meetings and specialty shows are held in conjunction with the Montgomery County Kennel Club Show at Ambler, Pennsylvania in October. In addition, the club holds a national Roving Specialty Show each year with one of the regional clubs acting as host.